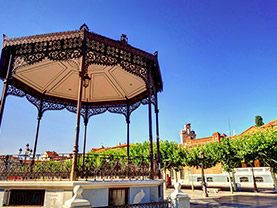 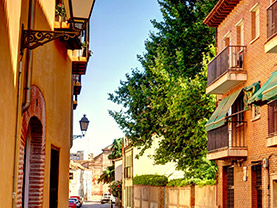 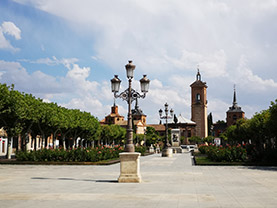 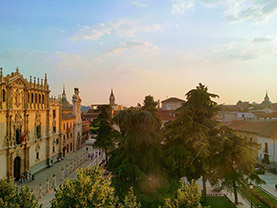 The program's tentative dates may help you organize your upcoming summer plans. However, please do not buy your airline tickets until you have received instructions from UA Study Abroad.

Located only 35km northeast of Madrid, Alcalá de Henares has a student population of 17,000 and offers theaters, shopping, concerts, and an active nightlife. Study on this program and you will be in the same place that Spanish literary heroes Cervantes, Lope de Vega, Nebrija, Juan de la Cruz, and Quevedo also studied and taught.

Students choose 6 units of direct UA credit for the four-week session from the following courses:
*Completion of SPAN 251 is required for this program

Instruction will be provided by a UA professor and by graduate teaching staff from the UA and Universidad de Alcalá.

Alcalá de Henares is the birthplace of Cervantes, the epitome of Spanish and Modern Literature. Many other masters of Spanish Literature such as Lope de Vega, Nebrija, Juan de la Cruz and Quevedo studied and taught here. It is a historic city, dating back to the Roman city of Complutum. It was later named Alcalá, or "fortress," by the Arabs whose wall still stands. The 16th century churches have turned into restaurants and the 17th century convents now house the Law School and College of Economics.

With a population of 170,000 people, Alcalá is a very comfortable and walkable city. Living in Alcalá’s pleasant surroundings, with the school just a walk from your accommodations, allows for a relaxing daily schedule. The friendly and peaceful atmosphere of the city, its beautiful Spanish Renaissance architecture and the hospitality of the local Alcalaínos create the perfect environment for immersing yourself in the Spanish language and culture.

Alcalá is located in the center of Spain, a short distance from the great metropolitan capital, Madrid. With easy access to bus, train and airplanes, the location offers the opportunity to travel and experience more of this great country.

Participating in the the Alcalá de Henares program provides a perfect opportunity to practice and expand on one's Spanish language skills. Living with a local family, or homestay, provides not only language practice, but a true immersion into the life and culture of the Spanish people. Additionally, you can expect many of your meals to be prepared by la Señora de la casa.

UA Dept. of Spanish and Portuguese

Hear experiences from an Arizona in Alcalá de Henares Alumni!