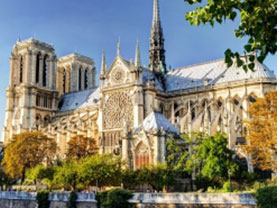 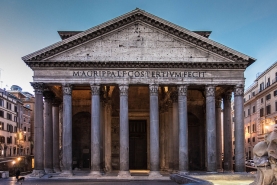 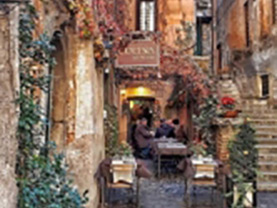 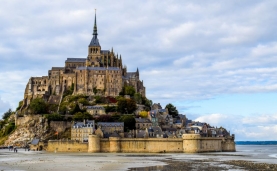 The Advanced Honors Trip is open to Advanced Students (sophomore status through senior status). Students will study culture through the lens of language and anthropology. You will travel and experience new cities and have the opportunity to visit two different countries, exploring ideas about the relationship of art to various fields. You will earn six units of humanities general education credit.

Since I first began my career as a Professor of Classics, I have lived in Rome, studied there, and led groups of travelers to its famous splendors. The UA summer “Honors City as Text” courses are among the most wonderful I have ever taught, because students move between desktop and street life to become architects of their own learning. When I meet students from previous summers, they always tell me about the friendships they made on the trip and the confidence they gained in their own ability to negotiate transportation, language, and the unexpected international settings. Most important, perhaps, they tell me that their summer Honors experience gave them a perspective on their own lives and career plans. As we stand in the ruins of Rome and experience the rise and fall of empires and millennia against the delightful dolce vita of the modern city, I hope that Rome will shed its golden dust upon you, too, and that the experience will change you in all the best ways.

All students will earn 6 units by participating in this program.

These courses fulfill general education requirements. HNRS 160D is a Tier One TRAD course, and HNRS 208 is a Tier Two Humanities course.  In some cases, other course numbers can be substituted.

Students will either stay in fully equipped multi-bedroom apartments or in twin occupancy hotel rooms.

This summer course envisions 3 weeks in Rome, including an excursion to the Naples/Pompeii excavations and museums, and one week in Paris, Louis XIV’s and Napoleon’s ‘new Rome.’ In this course, students will explore Napoleon’s appropriation of the art and propaganda of the Augustan Empire to create a new Rome in the Napoleonic Era, 1804-14. When Napoleon conquered and transformed much of Europe in the early nineteenth century, he modeled himself upon Augustus and exploited the cultural capital of antiquity (military history, literature, art, monuments, and urban planning) to transform Paris into a new imperial metropolis, a new empire, a new caput mundi, a new Rome.

Napoleon associated himself with Augustus and his regime of global empire. The Napoleonic Era lends its name to the late neoclassical style that characterizes painting, textiles, furniture, porcelain, architecture that served the glory of France and promoted his regime. Images of antiquity blended with Napoleon’s imperial symbols, and courts all over Europe adopted the Empire Style.

Through Napoleon’s lens we will experience the court of Augustus and the art and material remains of imperial Rome. Points of interest in Rome include sites from all ages of the Roman Empire: classical monuments including the Forum and Colosseum; Christian churches and Catacombs; Medieval towers and palaces of noble families; Renaissance art, particularly the Vatican collection; Baroque art, particularly the Borghese Gallery; and the Neoclassical urban design of Mussolini and the Fascist regime. In addition to the study of the Roman empire from Forum to Fascism, students will also visit in Rome the wonderful Museum of Napoleon (Museo Napoleonico: https://www.napoleon.org/en/magazine/places/museo-napoleonico-rome-2/) in Rome, a collection of the First and Second Empires, including personal possessions and works of art/objects connected to the Bonapartes; and Museum of Rome at Palazzo Braschi (http://www.museodiroma.it/en/sede/palazzo_braschi) and in Trastevere (http://www.museodiromaintrastevere.it/), where the permanent collections focus on Roman life in the late eighteenth and nineteenth centuries, the so-called Napoleonic Era. The collection includes paintings, prints, drawings and watercolors, including the series on Roma sparita ("vanished Rome") by Ettore Roesler Franz (1845–1907), and life-size representations of day-to-day life, known as "Roman Scenes."