SBS alumnus and employee Anna Augustowska is the director, cinematographer and editor of “Our Desert Farms,” which won a Rocky Mountain Emmy Award.

UA alumnus Anna Augustowska won a Rocky Mountain Emmy Award this fall for her documentary "Our Desert Farms.” Augustowska, who received her master's degree in 2014 from the School of Journalism, is a multimedia design specialist for the UA College of Social and Behavioral Sciences. 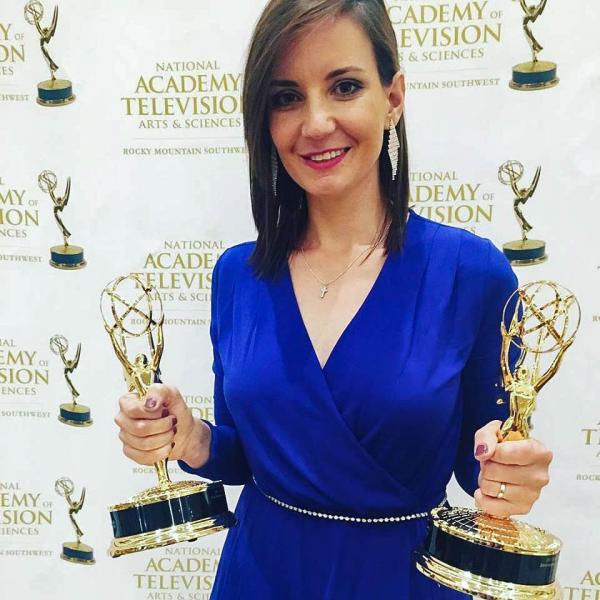 “Our Desert Farms” explores the issues of climate change, drought, and the global market through the lens of a local story on Central Arizona farmers, who are often seen as villains who should not farm thirsty or low value crops in a dry state. The film uncovers the challenges of staying in the farming business, the future of its practices, and implications for Arizonans.

“Climate change, agriculture practices and water shortages are such important topics to discuss, especially now in the times of the unknown future of this planet,” Augustowska said. “The team of “Our Desert Farms” wanted to tell an emotional story that will start a conversation and will bring various stakeholders together to look for potential solutions.”

Augustowska is the film’s director, cinematographer and editor.

“I wouldn’t be where I am without the School of Journalism,” Augustowska said. “It gave me hands-on experience in visual storytelling, gear, editing software, all of that. They teach you ethical reporting and standards.”

“Our Desert Farms” has other UA connections. Joshua Montgomery, who graduated from the UA School of Geography and Development, is the film’s co-producer, cinematographer, and assistant editor. The film also includes interviews with UA experts, including Daniel Ferguson, director of Climate Assessment for the Southwest, Sharon Megdal, director of the Water Resources Water Center, and Jeffrey Silvertooth, an associate dean in the College of Agriculture and Life Sciences.

Augustowska previously received a Rocky Mountain Emmy-award for her short film “Donnie,” which tells the story of Donnie Cianciotto, a transgender man living in Tucson, and his struggle to obtain reassignment surgery. Augustowska is currently turning “Donnie” into a full-length documentary.

Augustowska is honored that the Emmy judges found “Our Desert Farms” “worth this amazing award,” and is grateful to the entire team who worked with her.

“I am very happy to be able to bring films like this one to the community and see such a positive response,” Augustowska said. “The awards are nice indicators that as a filmmaker you are doing something right, but a good story and charismatic characters are ultimately what drive me.”

Augustowska, a native of Poland, studied at the UA as an international student and visiting scholar.

The University of Arizona and WeWork today announced an innovative partnership to expand the University of Arizona's Global Microcampus Network to include over 490 WeWork locations in 80 cities and 37 countries. Under this partnership, students enrolled in UArizona programs internationally have "All Access" to WeWork's flexible workspaces, allowing them to continue their U.S. degree from the comfort and safety of their home country. The new partnership with the global workspace leader will provide a flexible framework for more students looking for a path to a U.S. degree.

In a fall 2020 enrollment update from the College of Fine Arts, we learn that faculty and staff from several departments, including UA Global's Lara Pfaff, a program director with International Student Services, went the extra mile this summer in assisting an international student from Tijuana, Mexico, as she navigated the process of getting to Tucson for the start of classes last month.

University of Arizona Global is pleased to announce an exciting new partnership with Uninest GK, a student housing company located in Tokyo, Japan, giving students access to UArizona undergraduate, graduate, and customized degree programs. Through this Global Student Accommodation arrangement, students residing in Uninest housing can pursue a University of Arizona degree without leaving the country. If you’re following news about trends in higher education, you may have read...